Earlier this year ten of us took part in a 26 hour squash marathon. We raised over £3000 for St Gemmas hospice in Leeds who look after terminally ill patients. All in memory of a former member of Rothwell Squash club.

We played in a relay type fashion non-stop from 4pm on Friday through to 6pm on Saturday. Everyone got to play everyone else at least once, sometimes twice. The most time you’d get between games was just over one hour. 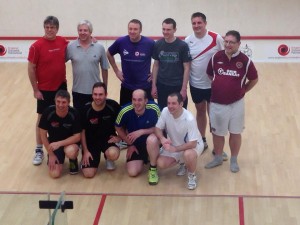 The first part of the marathon was pretty easy. It started getting difficult on the stretch from 3am to around 9am. Your body just wants to sleep, but just as you are beginning to feel sleepy your back on court for another burst of adrenaline!

All in all a great experience though and I would definitely do it again.

Squash play follows a pretty standard pattern. First at the start of a match the right to serve is determined by spinning the racket. The person not spinning the racket usually chooses for a logo on the butt of the racket to be either up or down. Whoever wins the spin gets to serve first.

The server can choose to serve from the right or the left box on his initial service. Most players choose to serve to their opponents backhand as this is assumed to be the persons weaker side for returning.

Let’s say for example that Bill is playing Bob and Bill wins the spin and gets to serve first. Bill serves and then Bob returns the ball, each player then proceeds to strike the ball alternately until either Bill wins the point or loses his service.

If Bill loses the rally then Bob serves.

If Bill wins the rally then he gets a point.

Play continues like this with the server gaining points if he wins the rally, or losing his service if he loses the rally.

This pattern of play continues throughout the match.

The above assumes the scoring to nine system where only the server scores for more details on scoring including the new point-a-rally system see squash scoring.