Squash Deception: Top 12 Tricks To Deceive Your Opponent And Send Them The Wrong Way!

In its most basic form, squash deception is setting up for one shot and then playing another or put another way, making it look like you are playing one shot and then playing an entirely different shot. Deception usually goes hand in hand with squash disguise. Disguise is preparing for many shots in the same way so that your opponent has difficulty in determining exactly which shot you are about to play.

“Squash deception that wonderful moment where you send your opponent the opposite way to the ball.”

To deceive your opponent in this way you have to set yourself up so that you look like you are playing one shot but then you actually play a different shot entirely.

Your opponent can only chase after the ball once they know which way the ball is heading.

But how exactly do you go about creating disguise and/or deception? How do you make your opponent have to guess which way to go?

Well for a starter check out this video which demonstrates how to look like you’re about to play a cross-court drive when in fact you actually play a straight drive.

Practice Makes Perfect – Or At Least Makes You Better Than Before!

For disguise and deception to work well it needs to become effortless and natural. You need to be confident in your own abilities to disguise and deceive your opponent. A great way to do this is simply to practice.

Good deception can often result in a winning shot or at least put you in a really strong position in terms of the rally. However, poor deception just leaves you completely open to failing. As deception often makes a lot of use of the wrist it can be difficult to do and result in a weak open, mid-court shot.

Deception in matches should only be used when you are well practiced and comfortable at playing that particular shot.

Try the following routines for solo practice, use both the backhand and forehand sides of the court…

Practice With a Partner

Have some fun while you are practicing the above. Squash disguise and deception can be very difficult to master so don’t get too down if it doesn’t come quickly for you. Keep practicing and something will work for you. In matches only use the techniques that you feel very comfortable with.

To get a good feel for exactly how well you are at disguise and deception try and get someone to video you on their smartphone during your practice session. Look out for anything that you do that might give away the shot you play.

Squash deception is an advanced skill as it often requires your body to be in a position not suited for the shot you are about to play. The use of the wrist often has to come into action so as to pull the shot off – this can result in a potentially weak or poor shot. 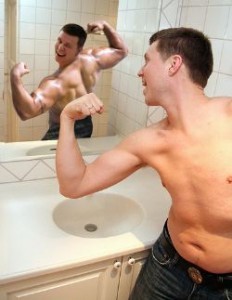 The trick with deception is not to overuse it. If you are known to play the same shot over and over again your opponents will become aware of it.

Below is a video of Jonathan Power. Jonathan was known as a master of deception…

A great deception shot is to move your body so that it is facing the front wall making it look like you’re about to play a cross-court and then use your wrist to pull out a straight drive. Clever players also use their head to look in the direction of the cross-court. This makes the shot a tad more difficult but adds that extra layer of deception if you can pull it off.

From the back of the court, you can try and deceive your opponent by facing your body towards the back wall to make it look like you are going to play a boast off of the side wall and then again using your wrist pull out a straight drive.

Closely related to squash deception is squash disguise which is all about setting yourself up so that it looks to your opponent that you are going to play a particular shot when in fact you actually play another.
For me, one of the first disguise shots that I learned was a short back swing to look like you are about to play a drop shot and then at the last minute flick the wrist upwards to lob the ball over your opponent to the back of the court. Try and hold off playing this shot long enough until you sense your opponent moving forward.

A slight variation on the above shot is to again show a drop shot and use a flick of your wrist to play a cross-court drive.
Disguise is used often by top-level players – you will often see them preparing early and then holding the shot as long as they can before striking the ball at the last possible moment. Holding off from playing your shot as long as possible can result in your opponent committing to move in a particular direction too early. Holding the shot is all about good racket preparation – so when practicing make sure that you have your racket up and ready.

One great tip I was told to make all your disguise and deception shots stronger is to only look at the ball for the moment before and at the time you strike the ball. After you have struck the ball have the confidence to know the ball is going where you wanted it to go. Don’t give your opponent any more clues by watching the ball immediately after it leaves your racket.

What Others Have To Say About Squash Deception

“Deception comes in many forms but it is most effective when it is subtle. The less time your opponent has to process information from you prior to impact with the ball, the more success you will have.” – David Campion

“Sending your opponent completely the wrong way is one of the most satisfying feelings on a squash court. Making it happen however can be a challenge.” – Peter Nicol

In this video, Karim Darwish demonstrates how to look like you’re playing a drop shot but actually play a straight or crosscourt drive…

Disguise can and should be done all of the time if you are able. Squash deception however should be used sparingly. It’s not something you should be doing every second shot. Overusing it will enable your opponent to better work out exactly what you’re doing. They will begin to read your game and have you and your shot completely sussed out before you play it.

Is your squash club in need of a new court booking system? If so please take a look at our PlanIt-BookIt product and how it’s been designed to work well with squash clubs. Click here for more details.

Want To Start Boasting About Your Squash Boast? – Yes Then Read On Squash Tips To Improve Your Game Today!

Want To Start Boasting About Your Squash Boast? – Yes Then Read On