Learn The Squash Rules So You Can Let Your Opponent Know If They’re Cheating!

Squash rules are essential to ensure safe play and fair competition. The game is played in a squash court which is a confined area and therefore physical contact often occurs. The rules prevent unfair physical contact from having an influence of the outcome.

Due to the close proximity of the players on a squash court there is a possibility for a player to get hit by the ball or the racket. For this reason, it is wise to wear protective eyeglasses during play. Also, each player needs to have an awareness of his opponent and they should try to avoid any excessive follow-through when swinging the racket. 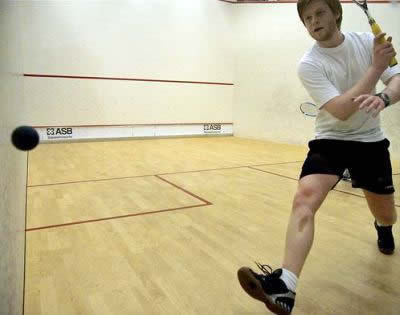 Exaggerated follow through is both illegal and dangerous and referees can deduct a point for such reckless play.

When playing squash for fun at your local club or sports center you will rarely have a referee so both players must use common sense, patience and restraint to ensure the game is enjoyable and to reduce the risk of injury.

From time to time you are bound to get in the way of your opponent or vice versa. Try your best to be aware of where your opponent is. This is useful both from a safety perspective and it can be an advantage for you in the game.

Always remember that it is a game and it is meant to be enjoyed win or lose – the rules assist you in keeping safe and in playing a fair game.

The squash rules allow for players to have five minutes to warm-up when they step on to the court before their first game. The players play for two and a half minutes and then switch sides, hitting the ball back and forth to each other and practicing shots prior to their match. This is done to both warm up the players and to warm up the ball (squash balls don’t bounce very well until they are warm).

After the warm up one of the players spins their racket with the other player usually calling whether a logo on the racket lands up or down. The winner can elect to serve or receive, it is normal to elect to serve. With the traditional scoring system, there is a distinct advantage from doing so.

Squash Rules: Continuation Of The Rally

After you serve your opponent attempts to return the serve. A return of serve must either volley the ball before it lands or hit the ball after its first bounce. If a ball is played after the second bounce it is declared, “not up”.
The ball must touch the front wall above the tin and below the out line before landing on the floor. The ball can touch the back and sidewalls prior to reaching the front wall.

The racket must only touch the ball once. If the racket touches the ball twice then it is declared a “double hit” and the striker loses the rally.

All successive shots in a rally follow the same rules as those mentioned above.

If a player is in a clear winning position and the rally is stopped because of interference from the other player or the other player failed to make a reasonable effort to get out of the way then a stroke is awarded. The player who is awarded the stroke wins the rally.

If a player strikes the ball and it is heading directly towards the front wall but hits her opponent on route then a stroke is awarded to the person striking the ball.

If the ball hits an opponent but was heading to the side was first and would have also made it to the front wall then a let is awarded.

One should attempt to not hit your opponent – if your opponent is in the direct path between you and the front wall then you should stop play and ask by saying “please” and a stroke should be awarded.

After the players have warmed up on each side of the court a racket is usually spun to determine who serves first. Most rackets have some marking on the end of the handle that can either land up or down.

The server can choose to serve from either the left or the right side (often people choose to serve to their opponents backhand for their starting serve as this is usually weaker than a forehand). 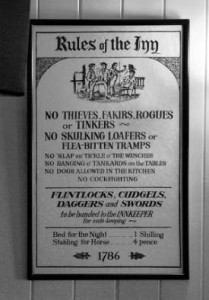 The server can choose to serve from either the left or the right side (often people choose to serve to their opponents backhand for their starting serve as this is usually weaker than a forehand).

The ball must land in your opponent’s back quarter of the court. It can touch the side or back walls before landing but the ball must not land on or below the cut line or land above the out-line which is the upper line down the side walls of the court.

If a player is prevented from reaching the ball, then they should stop play and ask for a let. If they continue and attempt to hit the ball, then no let is given unless the other player impeded the swing. A let should be called prior to hitting the ball.

If the appealing player could not have reached the ball anyway then no let is given.

If the appealing player did not make a genuine effort to reach the ball, then again, no let is given.
squash rules 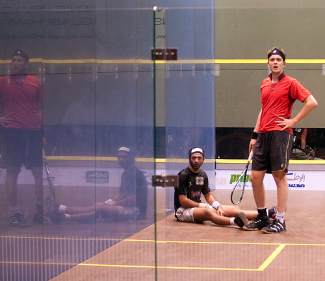 In summary, a let is awarded if a player would have got to the ball but was prevented from striking it as a result of the other player. If a let is awarded (or agreed upon between the players) then the rally starts again with the server serving from the same serve box.

For a detailed list of all the official squash rules then please refer to the documents at World Squash.

A typical club game is scored up to 9 points and only the server can score a point. If the receiver of the serve wins the rally then they only win the right to serve next, i.e. they don’t get any points. At 8-8 a tie break system is used and the receiver (the person who got to 8 points first) can choose to play to 9 points “no set” or “set one” or they can choose to play to 10 “set two”. This system of scoring is known as the International system.

There is said to be a slight statistical advantage from choosing to play “set two” to 10 points so you often see this being called as the preferred option. 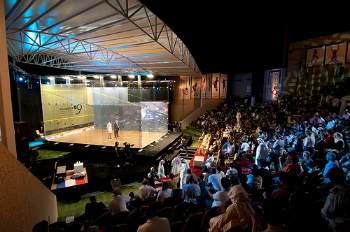 Alternatively, the new scoring rules play to 11 points with players scoring on all rallies whether serving or not – PAR (Point-A-Rally). If the game gets to 10-10 then there are no tie breaks, you simply have to win by 2 clear points.

11 points is now the official scoring rules of squash and should be used if possible. Many clubs however are slow to convert to this new format of scoring as some people argue that the games go too quickly for the lower skilled players who tend to have shorter rallies.

An older format of scoring that is sometimes called American rules scoring and is similar to the point a rally scoring system mentioned above except the games are played up to 15 points. At 14-14 the receiver decides if the game is going to be played up to 15 or 16. However, I have also seen this system used where it is the first to score to 15 regardless of whether the players got to 14 – 14.

A match is the best of five games, i.e. the first player to get to 3 games wins the match and women play the same number of games as men.