A squash court can often seem quite small, that is until you have to start running from one end to the other so as to reach the ball that your opponent has just played.

Red lines on the walls and on the floor that are 50mm wide mark the court. The boxes on either side of the back half of the court denote where the server should stand.

The tin is the board that is on the base of front wall 48 centimeters from the floor, it is usually made out of plywood or metal sheet. In many clubs the tin often displays advertising. The strip of wood, painted red, just above the tin is known as the board. 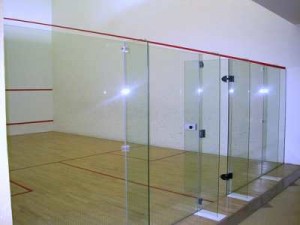 The cut line is the line that crosses the front wall 1.6 metres from the top of the tin.

The short line is the line on the floor in front of the service boxes that separates the front half of the court from the back.

The out lines are the lines on the upmost area of the front and sidewalls.

The half-court line is the line that stretches (usually from the court door) from the back of the court to the short line.

The serve, the first shot in any game, must hit above the cut line on the front wall, before hitting any other wall. It must then rebound and if not returned immediately on the volley, hit the floor past the short line and into the receivers back quarter of the court.

If the ball does not reach the receivers back quarter of the court, or if the ball goes beyond the out lines or into the tin then the server loses the rally.

Servers must keep one foot within the serve box when serving. Winning the rally in which you started serve means that you move to the opposite box for your next serve.

Servers can elect to start from either serve box, however it is common to start serve to your opponents backhand as this is usually assumed to be your opponents weakest side.

The cross-section between the short line and the half court line forms the T. This is the most dominant area of the court, which is extremely important from the strategic aspect of the game.

Read About The History Of Squash

Go From Squash Court To The Home Page