Squashing out the competition

Many Americans are unfamiliar with the game of squash. Squash is a sport that is played by two people in a four-walled court with a small, rubber ball.

The players use rackets to hit the ball. But for 18-year-old Amanda Sobhy, squash is her life. She made history by becoming the youngest player to have ever won four Women’s International Squash Players Association titles. Read the interview below to find out what it’s like to be a world ranked athlete and what Ivy League college she is headed to this fall! 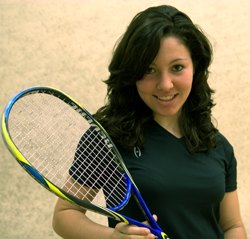 How old are you and where are you from?

For those unfamiliar with the sport of squash, can you describe it for us?

When describing the game to someone, I try to make it as simple as possible. It is similar to racquetball. There are two players in a court who hit a ball back and forth. However, unlike racquetball, a squash racket is longer in size, but narrower in width. The ball is a small, black, rubber ball about the size of a golf ball.

How and when did you start playing squash?

I started when I was 12. I played tennis since I was six, but I was always dragged to squash tournaments because my older brother played. When I was 11, I played squash and tennis. It was then that my dad told me I needed to choose one sport or the other. He said, “Either become really good at tennis, or become really good at squash.” So I chose squash. The sport also runs in my family. Both my parents played at a competitive level. My older brother and my younger sister also play. My sister will represent the U.S. team in the World Championships.

How do you prepare for a tournament?

I usually load up on carbohydrates the week before the tournament. That way I build up my energy for the many matches to come. During a tournament, I usually follow a strict routine: hit balls in the morning, eat, rest up before my match, play my match, eat, and then sleep. It’s not too exciting, but it keeps me in the right frame of mind. In addition to physically preparing, I also try to get mentally prepared and confident. That makes a huge difference in my playing and always helps out in a tournament.

What are the advantages and disadvantages of being an accomplished squash player?

The advantages would definitely be having my name known around the world and being able to create a name for myself. Being a world champion is an accomplishment that will stay with me forever. It’s nice to receive so many compliments from people. However, with all this glamour and fame comes a lot of hard work and sacrifice. I gave up a “normal” teenage life in order to succeed in this sport. Would I say that it’s worth it? Absolutely.

What do you consider to be your biggest accomplishment?

My biggest accomplishment is winning the Women’s World Junior Squash title last year in Cologne, Germany. Not only did I happen to win on my 17th birthday, but I also became the first American player to ever win a World Open title. This was such a special win for me because it showed how hard I worked in order to achieve a goal. Winning it on my birthday was an extra bonus!

You’ve traveled around the world for competitions. Where have you gone and what is your favorite place?

The list may take a while, so brace yourself. I have been to Egypt, India, Germany, The Netherlands, England, France, Singapore, Australia, Brazil, Guatemala, New Zealand, Canada, Cayman Islands, Trinidad, and various places within the United States. I don’t really have a favorite place because each place is completely different and is its own experience. But, my top two favorites would definitely be Trinidad and Cayman Islands. I guess you can say that I like the Caribbean.

Besides playing squash, what do you do to stay healthy? What are your other hobbies?

Having a balance in my life is the key for me in order to stay hungry for the sport and to not burn out. I participate in a lot of musical programs in my school. I have been playing the French horn in the band since the fourth grade. I also sing in the school choir as well as another, highly selective school choir called The Madrigals. I also love to stay active, so whenever the weather is nice I go kayaking or play any type of sport just to be outside.

How do you manage school, friends, and sports?

Managing school and sports takes a lot of time management skills and organization. Throughout the year, I would always tell my teachers when I would be away from school so they would send me work to do. When I got back, I would meet with them to go over anything I didn’t understand. As far as friends, I have met tons and tons of great people all over the world from playing tournaments. I always look forward to going to tournaments so I can see them.

What advice would you give other girls that would like to become world ranked athletes?

My biggest advice for girls who want to succeed in a sport is to always make sure that they enjoy the sport they play. If they don’t, then trying to become a world ranked athlete will take a lot more work than it already requires. I love squash, but I am still faced with grueling sessions and tough fitness requirements that leave me sore for days. When the going gets tough, that’s not the time to quit! So it’s important that you love what you do so you can focus on that love when it gets tough.

What are your plans for the future?

Starting this September, I will be attending Harvard University where I will play on their squash team for the next four years. Hopefully, during my time in college, I will be able to play in as many professional tournaments as possible. Once I am done with college, I plan to play full time on the professional circuit and see how far I can go.

Go To The Home Page